Skip to Content
Home Baking Basics What is the difference between baking soda and baking powder?
Share this...

If you’re anything like us, there’s a fighting chance you’ve got at least one tub of both baking soda and baking powder in your cupboard. Some recipes call for one, while others call for the other. You’ve never really known why, but the success you’ve had in baking has meant that you’ve never really questioned it.

Well, we got curious and looked it up. It’s actually quite interesting, and in this article, we’re going to take you through the differences between baking soda and baking powder.

What is baking soda?

Baking soda is a leavening agent, which means that it helps bakes to rise. Typically, it’s used in cakes, muffins, and cookies. More formally, it’s known as sodium bicarbonate, and it’s a white, crystalline powder which is naturally basic.

Baking soda works by producing carbon dioxide during the cooking process. This takes place as the basic powder will react with an acidic substance that the recipe will call for, like lemon juice or buttermilk. This reaction produces carbon dioxide as a gas, which aerates your baked goods.

In order to activate baking soda, it must be combined with both an acid and a liquid. If the acid is a liquid, then you’re in business, but if you’re adding citric acid powder, you may also need to add some water to allow the reaction to take place.

What is baking powder? 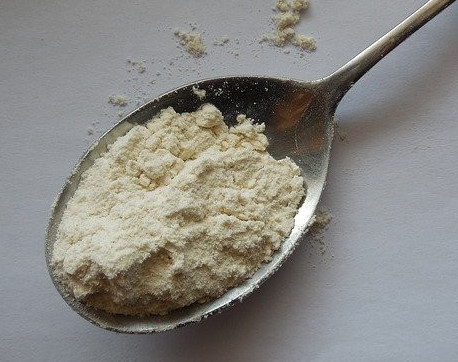 Unlike baking soda, baking powder is a fully formed leavening agent. It contains both the basic chemicals and the acidic ones which will be needed to allow the bake to rise.

Typically, baking powder is also packed with cornstarch. The reason for this is that cornstarch can act as a buffer, and thereby stop the acid and base from reacting during storage.

Baking powder works in the same way as baking soda: by combining two chemicals to release carbon dioxide which will leaven the bake. The difference is that since baking powder already contains an acid, no additional acid needs to be included, so just the addition of a liquid is needed. In most bakes, this will be either milk or water and will serve simply to allow the chemicals to mix.

Another distinction from baking soda is that there are actually two types of baking powder available: single- and double-acting. Generally speaking, single-acting baking powder is only used by food manufacturing companies, while double-acting is used in home baking.

These terms mean that the powder creates either one or two reactions to assist with the leavening process. In a double-acting powder, the first reaction occurs at room temperature while mixing, and the second occurs while it’s being heated in the oven.

For many different recipes, a longer rising period is favorable. The reason for this is that if the rising happens all at once, the bake is more likely to lose that rise after a short period of time. Therefore, double-acting powders are used to give home bakes a particularly extended reaction.

How to substitute one for the other.

At the end of the day, they’re both leavening agents, so it should be easy to substitute one for the other in a pinch, right? Well… kind of.

Substituting baking powder for baking soda isn’t widely recommended at all, but it can work if necessary. Swapping the powders won’t require any additional ingredients, but baking soda is much stronger than baking powder. Therefore, you’ll need three times as much powder as you would soda. This can leave your end product with a metallic, chemical taste, which isn’t ideal, for obvious reasons. To avoid this taste, you may be better served by an alternative substitution.

Swapping powder for soda is a little more complex. For one, you’ll need roughly a quarter as much soda as you would’ve used baking powder, and you’ll also need an additional, acidic ingredient. This may not be ideal for some recipes, so it’s worth trying to source the right powder.

There’s much more of a difference between baking soda and baking powder than we ever thought, and as much as it may be particularly niche baking knowledge, it’s worth knowing for if you’re ever in a baking pinch. Armed with this knowledge, happy baking!